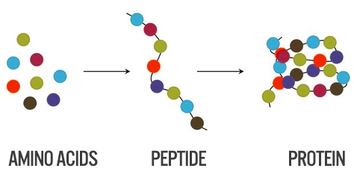 Click here to see a video on the importance of Peptides and examples of it in Antimicrobial Resistance.
​
The basic distinguishing factors are size and structure. Peptides are smaller than proteins. Traditionally, peptides are defined as molecules that consist of between 2 and 50 amino acids, whereas proteins are made up of 50 or more amino acids. In addition, peptides tend to be less well defined in structure than proteins, which can adopt complex conformations known as secondary, tertiary, and quaternary structures. Functional distinctions may also be made between peptides and proteins.
Animation below  :  Shows two amino acids connected by a peptide bond (—CO—NH—)

Any member of a class of compounds of low molecular weight that yield two or more amino acids on hydrolysis. They are the constituent parts of proteins and are formed by loss of water from the NH2 and COOH groups of adjacent amino acids. Peptide bonds are formed when the amine group of one amino acid binds with the carbonyl carbon of another amino acid.  Oligopeptides include: Di, Tri and tetrapeptides ( named depending on the number of amino acids in the molecule). Example: Dipeptides: consisting of two amino acids connected by a peptide bond (—CO—NH—). Optically active, they form crystals of characteristic shape. Polypeptides : have many amino acids. proteins essentially are very large peptides. In fact, some researchers use the term peptide to refer specifically to oligopeptides, or otherwise relatively short amino acid chains, with the term polypeptide being used to describe proteins, or chains of 50 or more amino acids.